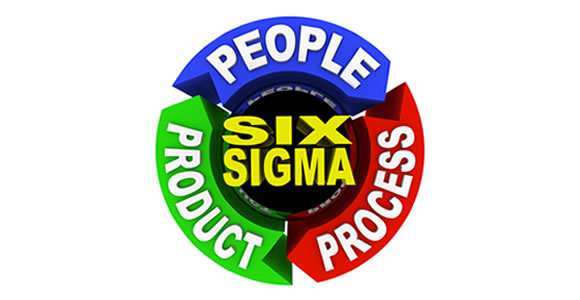 I am going to say it; Six Sigma is about saving you money first and improving quality second! This is why Six Sigma is still here and why it is still successful. It is the first quality improvement philosophy that has managed to really define savings firmly in the minds of a company’s management.

I could easily overcomplicate this introduction with complicated statistical talk to show how everyone else had defined Six Sigma incorrectly for years; but for now let us just accept that Six Sigma is in part about reducing your opportunities for defects down to just 3.4 times in a million. For most businesses this is a major improvement and more importantly a major opportunity to save some cash.

Within this introduction I am going to run through where Six Sigma has come from, what it actually does and how, and also where it is headed for.

The Origins of Six Sigma

Like many of the “new” business philosophies that are around, Six Sigma is firmly grounded in ideas and techniques that have been around for many decades. There are no new tools or ideas within Six Sigma that have not already been discussed and proposed by the great quality Gurus such as Shewhart, Deming, Taguchi and Ishikawa. In fact these guys and others are very much the grandfathers of Six Sigma and other ideas such as Lean.

But Six Sigma itself came into being as a process improvement methodology around 1986 within Motorola in response to criticism of the company’s quality performance. Where many other companies at the time were looking at statistically measuring process capability and defining them by something called CPK, Motorola decided to be different and use “Six Sigma” to define a tight process.

By a tight process I mean that they were trying to keep the processes (initially manufacturing) to the nominal specification within plus or minus six sigma deviations. Actually the 3.4 defects per million opportunities for defects come from plus or minus 4.5 Sigma with a 1.5 Sigma drift around the nominal but I did say I was not going to get into this discussion here.

But Motorola took a whole new approach to trying to improve their quality performance and build a new philosophy to improvement around their six sigma goal; a philosophy and set of methods that was firmly grabbed by Jack Welch of GE and made world famous.

Just what is Six Sigma really?

Six Sigma is far more than just a simple measure of process spread and the number of defects. It is a philosophy for improvement that is successful for one very important and overriding business reason that most other quality initiatives fail on; MONEY.

A Six Sigma project has to save money! Lots of money; if it can’t save lots of money a different project should be selected. How can any business resist a technique that is going to provide a huge return on their investment as well as making them far more competitive and profitable?

Six Sigma utilizes experts to achieve these savings; following Japanese martial arts conventions the levels of expertise are awarded “belts”, the main belts being Green, Black and Master Black belts. The higher the belt the more training and ability the individual has and the greater the expected savings that are expected from their projects.

The Experts select and define projects and use many statistical techniques such as statistical process control, design of experiments and many others to drive improvements in the processes that they are seeking to improve.

The Advance of Six Sigma

It was very quickly realized that Six Sigma could be applied to any process not just manufacturing, so like Lean we have Six Sigma being applied in service in health care in fact everywhere where there are chances for failure and opportunities to make improvements and save money.

Today Six Sigma is very much combined with Lean ideals and few people talk Six Sigma without calling it Lean Six sigma or Lean Sigma. We are also now seeing it combined with Agile and SCRUM and I am sure that almost any successful management improvement technique will soon have a Sigma attached to it allowing it to benefit from Six Sigma’s superior abilities to define monetary savings to an improvement project.